Hotteok. I first had this on the streets of Myeongdong at night. It was a very cold winter's night when I first arrived in Seoul. And this panfried sweet chewy cinnamony sugary pancake was a delight at 1000W. 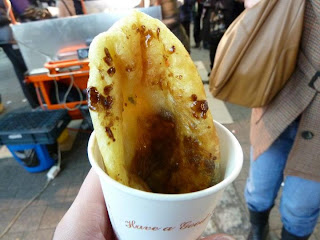 But then it got better. I went to Busan and it was freezing. They sold hotteok with nuts for only 900W. The first one I had at one of the stalls was nice. 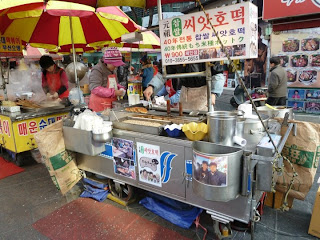 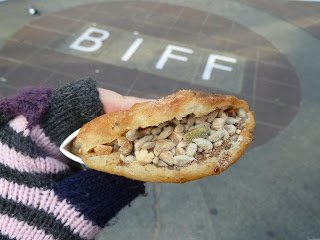 Then I came back a few hours later and noticed how popular another stall was. The line was massive! 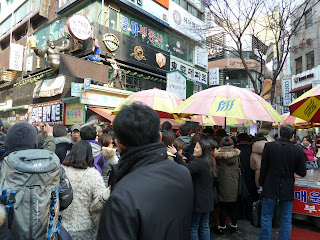 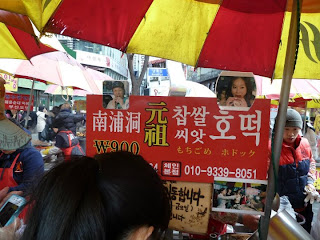 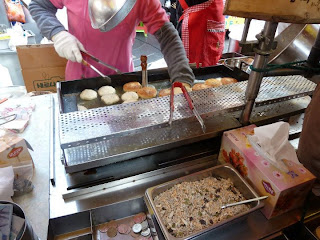 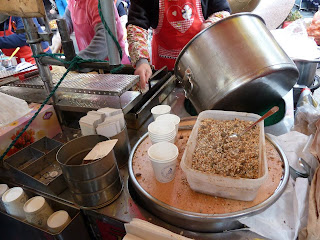 And they had a self paying system. It was all go go go! You put money down, take your change, and grab a cup for each hotteok purchase. For the same price as the other place, it had extra raisins/sultanas in the nut mixture. 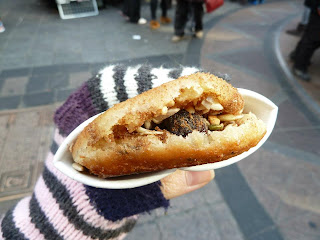 I didn't like it though. The raisins made it too sweet. I very much preferred the first place which wasn't as popular. This place was only popular because an actress was filmed buying one from there on a variety show... A bit overrated.

Anyway, a few months back, I was reeeeeeaaaally missing Korea. So I made myself some hotteok! Hehe :) 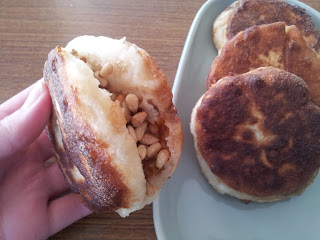 Dissolve 1tbsp sugar and yeast in water. Mix into flour, salt and the rest of the sugar, milk and oil.
Knead for 10mins. Cover, and leave to rise for about 3 hours.

Oil pan, and shallow pan fry for about 10mins or so until golden brown.

Serve immediately. Cut a hole at one end, and fill with extra dry filling and pine nuts.

Don't eat too many though.. as it's full of calories. I felt so fat after eating two of them in Busan... D: (Seriously, my face looked so plump when I left)
Posted by L at 9:52 AM