Looks can be deceiving

I decided to make a cake for a birthday. But I think I overmixed it, and didn't beat my egg whites enough.. So it had risen and then flopped when it came out of the oven. Boo. :( 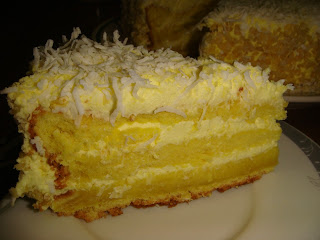 But after decorating it, you can't quite tell. Haha. Looks can be deceiving..

And why is the cake intensely yellow? Well.. it's a durian flavoured cake. Haha. :D

Sift the flours and baking powder together.

Fold the egg whites into the batter gently and uniformly.

Pour into a lined/greased springform pan.

Bake for 40 minutes or until cooked.

Allow to cool before decorating.

Whip all the ingredients together until stiff peaks can be formed. I usually use a whisk, but today I tried using an electric mixer. It worked and I saved time and energy. :) (I've never used an electric mixer to whip cream before..)

Cut the cake into three layers.

Spread cream between the 3 layers, one at a time. Then spread the remaining cream on the top and sides of the cake.

Sprinkle the sides with diced almonds and the top with shredded coconut. (Optional and variable).

Refrigerate for a few hours or overnight before serving. 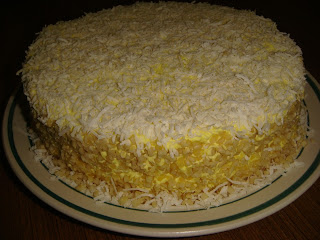 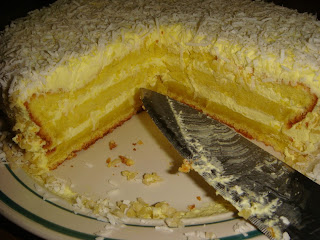 See how dense the bottom layer was because it sank? :(